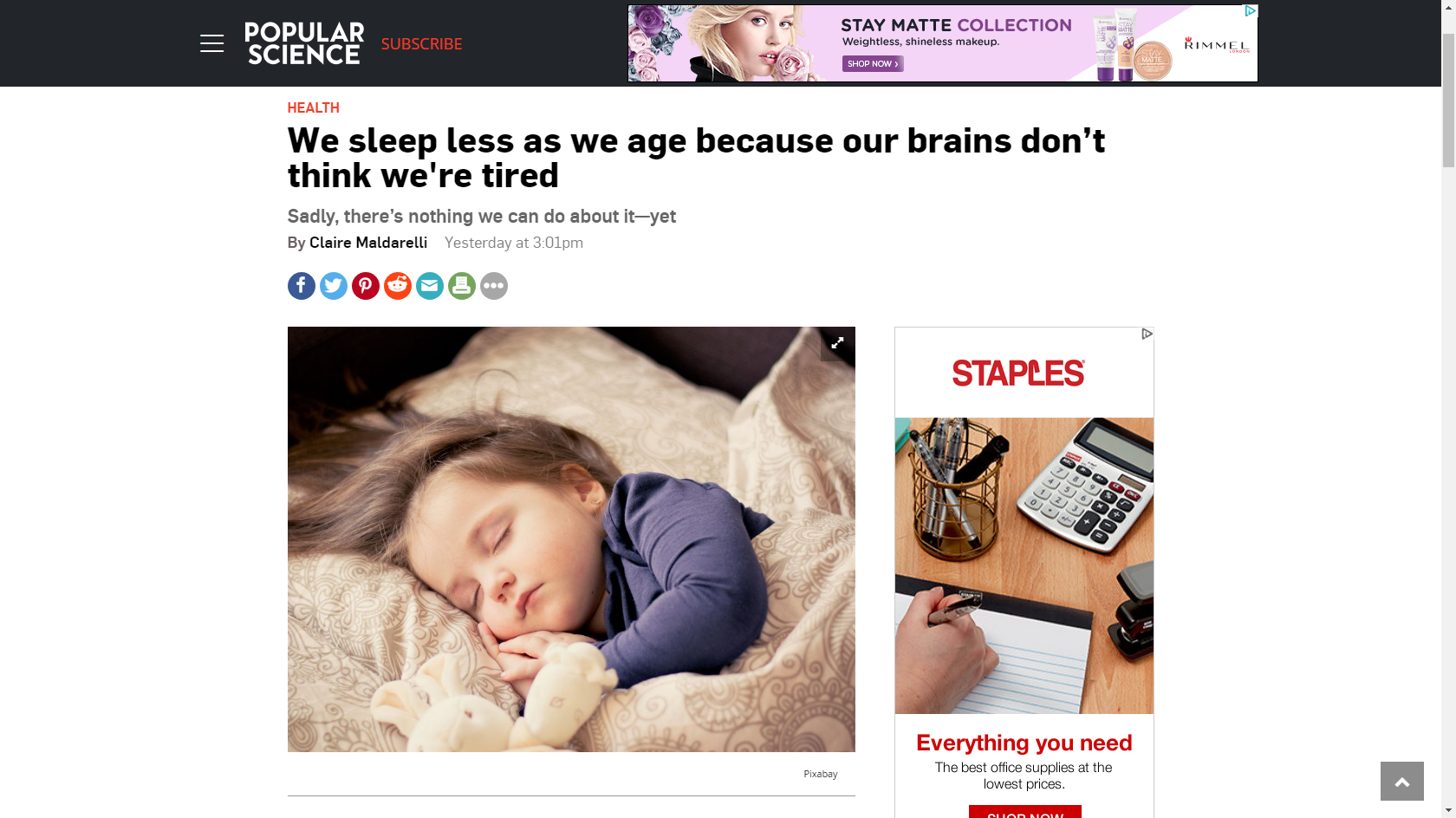 Ever Wonder Why You Sleep Less As You Get Older?

It’s a known fact that as we age, we sleep less. But the reasoning behind this phenomenon is poorly understood. Do older adults sleep less because they need less sleep, or because they simply can’t get the rest they need?

In a review out today in the journal Neuron, a group of researchers from the University of California, Berkeley argue the latter—that because of certain brain mechanisms that change as we age, we are unable to get a necessary amount of sleep. Researchers say this knowledge not only gives them a platform to develop medication to target this problem, but also a means to implement therapies already available that can treat these issues.

Every animal on Earth needs some kind of sleep, says lead study author Matthew Walker, head of the sleep and neuroimaging laboratory at Berkeley. This means sleep likely evolved right alongside life itself. However, Walker says, “Evolutionarily, sleep is about the dumbest thing you would ever do.” While you are sleeping, you are rendered useless: you’re unconscious, you aren’t foraging or socializing, and you’re vulnerable to predation. Sleep should have been weeded out of living creatures long ago, but it hasn’t. The reason, Walker says, is because sleeping is vital to life itself. In humans, every major organ and regulatory system needs sleep in order to function properly.

And in recent years, scientists have begun to find causal links between a lack of this necessary unconscious state and a host of diseases like cardiovascular disease, diabetes, and obesity. At the same time, researchers have learned that as we age, our ability to gain a good night’s rest declines.

Walker and his colleagues argue that that’s the result of a loss of neuronal connections in the brain that pick up on sleepiness cues. In experiments that compared the amount and type of chemical signals involved in sleep in younger mice to older mice, neuroscientists found that the chemical signature is the same regardless of the rats’ age. The problem, Walker says, is that the receptors in the brain that receive that signal decline with age. In other words, the aging brain has the same sleeping cues inside of it, but it’s unable to pick up on those cues. “It’s almost like a radio antenna that’s weak,” Walker says. “The signal is there, but the antenna just can’t pick it up.”