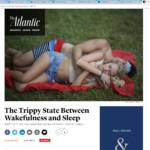 The State Between Consciousness And Sleep

There is a brief time, between waking and sleep, when reality begins to warp. Rigid conscious thought starts to dissolve into the gently lapping waves of early stage dreaming and the world becomes a little more hallucinatory, your thoughts a little more untethered. Known as the hypnagogic state, it has received only erratic attention from researchers over the years, but a recent series of studies have renewed interest in this twilight period, with the hope it can reveal something fundamental about consciousness itself.

Traditionally, the hypnagogic state has been studied as part of the sleep disorder narcolepsy, where the brain’s inability to separate waking life and dreaming can result in terrifying hallucinations. But it’s also part of the normal transition into sleep, beginning when our mind is first affected by drowsiness and ending when we finally lose consciousness. It is brief and often slips by unnoticed, but consistent careful attention to your inner experience after you bed down can reveal an unfolding mindscape of curious sounds, abstract scenery, and tumbling thoughts.

This meandering cognitive state results from what Cambridge University researcher Valdas Noreika calls a “natural fragmentation of consciousness” and the idea that this can be tracked over the early minutes of sleep entry is the basis of recent hypnagogia research.

A recent proof-of-principle study, led by Noreika, intensively studied a single individual as he repeatedly transitioned into sleep while the brain’s electrical activity was recorded using EEG scalp electrodes. The would-be-sleeper was asked to press a button when he experienced an intrusive thought or image, and to verbally report it to the sleep researchers. The descriptions were pleasantly bizarre: “putting a horse into a sort of violin case and zipping it up,” “the phrase learning to consume consciously from a master,” “visual image of a curled up music manuscript.”