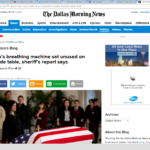 Was the death of Justice Scalia sleep apnea related?

Was sleep apnea a factor in Justice Scalia’s death?

The days after Supreme Court Justice Antonin Scalia died at a Texas hunting ranch were marred with confusion and speculation. The Presidio County Sheriff’s Office released an incident report late Tuesday night in response to a records request made by The Washington Post.

Here are the most striking details from it: