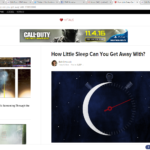 What Is The Minimal Amount Of Sleep You Need To Function?

Can you get away with less sleep than you need?

We’ve discussed how much sleep you need (at least seven hours, for most people), but often our real question is the flip side: Can you get away with less than the optimal amount, or even replace sleeping with a series of round-the-clock naps?

END_OF_DOCUMENT_TOKEN_TO_BE_REPLACED 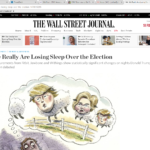 Is The Presidential Election Having An Affect On Our Sleep?

Wearable devices that track exercise and other vital signs reveal what many have suspected: The election is making us lose sleep.

END_OF_DOCUMENT_TOKEN_TO_BE_REPLACED 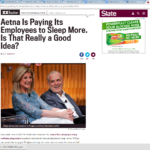 Last week, Aetna CEO Mark Bertolini revealed that one of his company’s many wellness programs is a system that incentivizes employees to sleep more. “If they can prove that they get 20 nights of sleep for seven hours or more in a row, we will give them $25 a night, up to $500 a year,” Bertolini said on CNBC’s Squawk Box, in a segment with fellow shuteye champion Arianna Huffington, who has just released a book called The Sleep Revolution. He said Aetna employees have “all sorts of different ways of proving it,” including wearing Fitbits to track their sleep patterns.